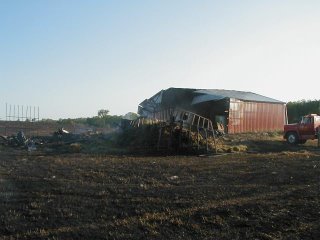 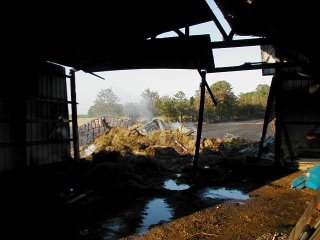 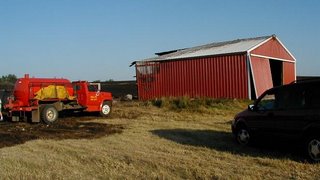 Today was a pretty good day, I did well and had a lot of fun at the Pine City Arts Fest, despite the near 100 degrees temps. I got home around until around 4:30 p.m. which is the time the sheriff said the fire call came in.
Stan and I were hot and tired after the Arts Fest, but peacefully oblivious to the fact that our pasture and hayfields were burning as well as our pole barn and entire 2006 hay crop.
We didn't find out until around 7:10 p.m. when our hay man called and told us. We raced over to find fire trucks all over and our less-than two year old pole barn burned out. We may be able to salvage some metal, but it's not useable anymore.
Thankfully the firefighters pulled out the tilt-trailer and 4 wheeler in time to save them, except for some severely melted areas.
Witnesses said the fire was amazingly fast and hot. As I mentioned earlier, the temps were extremely hot today, and the winds were strong from the south. That, along with our lack of rain for so many days, was enough to bring on red flag warnings for fire outbreaks in this area. We don't know how the fire started, just that once it did, they had very little time to stop it.
We heard they used helicopters and closed off the road. We have no electricity or water out there, so I'm sure it was difficult as well as exhausting for those poor fire fighters in this heat. I know I was wobbly when I finally got into my air conditioned van after the arts fest.
I'm not sure what this means as far as my flock goes. We'll have to see what the insurance covers. But with absolutely no hay for the winter this year, I'm going to have to drastically reduce my flock numbers, that's for sure...
at July 15, 2006 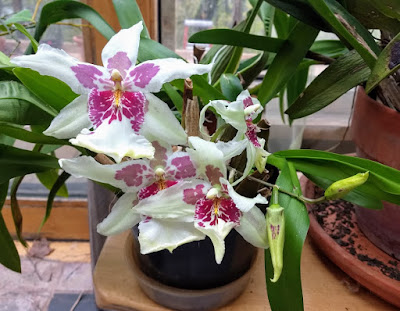