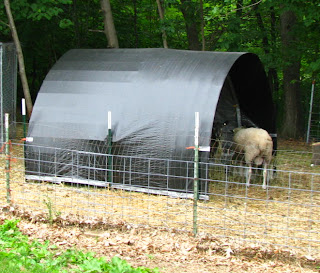 There was a discussion on the Shetlands list about how to make an inexpensive shelter for sheep out of cattle panels, T-posts, and a tarp. We redid our T-post shelters this summer so I thought I would post these photos of the ram shelter. As they say, a picture is worth a thousand words!

This shelter is made with two cattle panels, you can use as many as you want. We've used this two panel size to house about 5-6 Shetland rams over the winter...it keeps them out of the wind and rain and snow and keeps their hay dry. 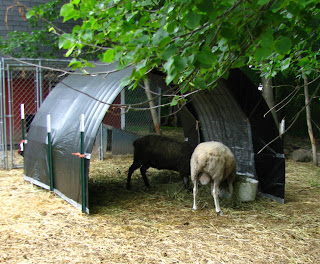 A word of warning, if you have horned rams, be sure to watch for any poor souls who get their horns caught in the panels. They learn after a while to keep their heads clear, but getting stuck can be dangerous for them.

To make this kind of a shelter, we start out by pounding a row of T-posts in, spacing them the height of the cattle panel apart. So for the two cattle panel shelter, we put in three T-posts about 4' apart. Then about 7' to 8' across from that row, we put in another row of three T-posts. (You don't want to go too far apart or the arch won't stand up to a heavy snow load or high winds.)

Then we take a cattle panel and position it inside two T-posts, bow it down to fit inside the corresponding T-posts across from it. The tension holds it in place while we secure it to the T-posts before installing the next panel. We use twine to tie the panels to the T-posts. We tried plastic electrical strips in the past, but they can snap in cold temps.

When all the panels are in place, we tie them together along the arch and then cover the whole thing with a heavy duty tarp.

This year we decided to tie the panels farther up the T-posts for added resistance to sheep who may try to climb up the sides or rams who love the spring of the arches when they bash them.

The first year we used this type of shelter, we were surprised at how the lambs scaled right up the sides playing a game of "king of the hill". Besides being dangerous (they were up pretty high!), they ruined the tarp in no time. We had to keep moving the rows of T-posts closer together to get a high angle that the little buggers couldn't climb. See the angle of the ewe's three panel shelter below. ;-) 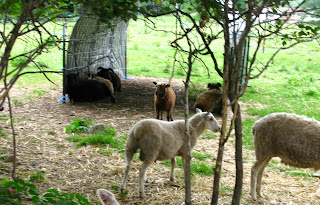 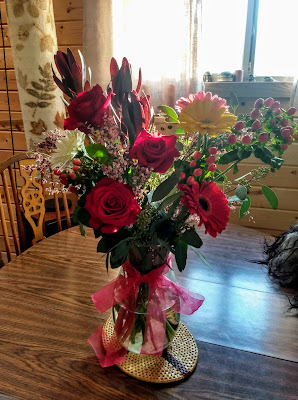