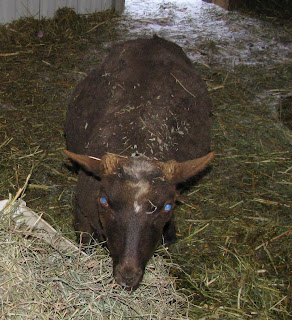 Hannah is the first one due to lamb -- on April 4th. For those of you who watch such things, notice her blue eye reflections. Being moorit, we would expect red reflections. She's an F2 Holly, a dark moorit ewe, with a few small moonspots. Bred to a mioget, I am hoping for modified ewe lambs. 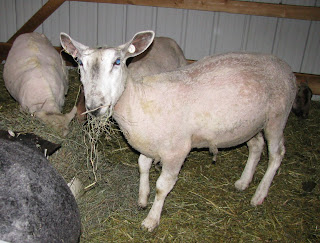 Lanora looking good after shearing. Colored BFL ewe on the left in the foreground. 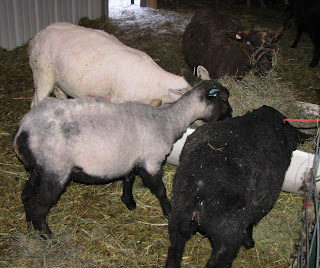 Lucy, our little grey katmoget ewe lamb. Not sure if she's pregnant this year...Dot is the white one behind her. I'm not sure who the black one is. 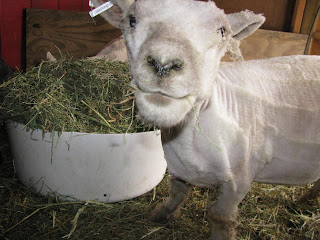 A Babydoll Southdown wether taking time out from the hay... 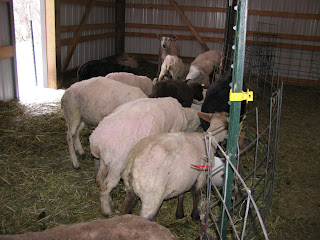 Look at the round tummies. We have three that already have some nice bags. 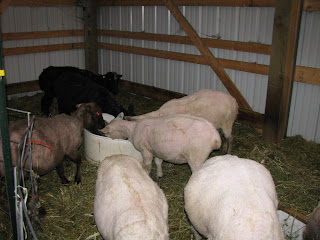 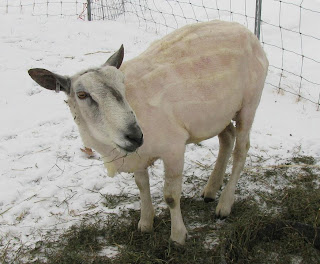 Shearing for 2008 is completed. There was some blood, but no major drama. The girls look to be in good condition. The whole affair was pretty laid back this year - with just me and the shearer and Ozzie, our Australian Shepherd. Ozzie loved cleaning up the hoof trimmings for me.
Now that we have a pole building to shear in, everything went so smoothly. It was snowing out so I locked the girls in the building. When the shearer arrived we squeezed them into a 10 x 10' area. I had the colored BFL ram and his Babydoll buddies in a catch pen. After each sheep was finished, it could wander about the pole building and nibble on hay. Little Dot was so cute, coming up to the shearer to see who was in his grasp at the moment.
After all the ewes were done is was time for the white BFL ram and his Babydoll buddy to get done. They would follow a bucket of alfalfa hay to the moon if needed. It is so easy dealing with the polled boys.
Now I have 22 fleeces to skirt and wash. Lots of types of fiber -- BFL, Shetland in lots of luscious colors, and the Babydoll fiber too. What a blast! Almost as fun as dreaming about the lambs that are due in about a month. :-)
at February 29, 2008 2 comments:

I finally got DSL yesterday! It's so much faster than the old dial up connection.

The shearer is coming this afternoon, I will try to get photos of the freshly shorn sheep later, but in this post I will include photos taken a few days ago where they are in full fleece. 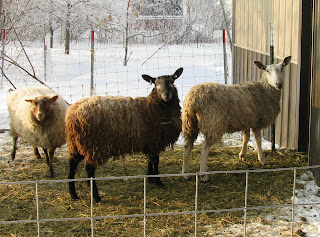 This is Cora, a musket shetland ewe on the left, Granite, a natural colored BFL ram and Lanora on the right, a white BFL ewe. Lanora looks trim in this photo, but she's pretty wide in real life. I'm hoping for lambs from her this year. 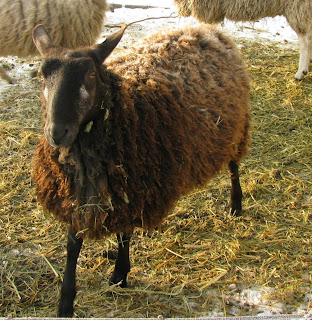 And this is Rhyn, our natural colored BFL ewe wearing a little VM in her neck wool. ;-) 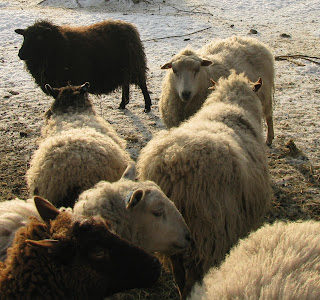 The shetland ewes.....with a Shetland mule face in the front. 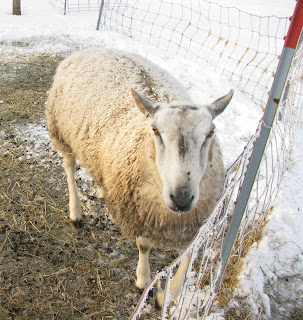 And our white BFL ram, Dougal. He's shown below with Albert, our babydoll southdown ram. They are a kind of cute together. I found out a couple weeks ago that sweet little Albert can be a strong ally with Dougal in fighting off a newcomer. Those two tag-teamed poor Granite when he made the poor choice to jump into their pen. Granite now lives with the two Babydoll Southdown wethers. 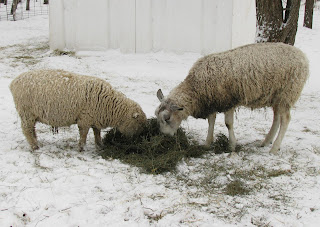 Here's hoping the weather report is correct and we'll have warm temps this weekend. This is the fastest I've ever been able to post on the blog and the phone line is open too. I'm going to love this!
at February 28, 2008 3 comments: 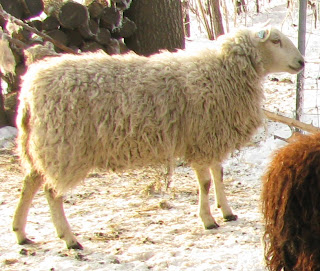 Our shearer is coming on Thursday so I wanted to get out and take some photos of the girls in full fleece. I need to resize many of them but here is a shot of Delia or Dot, it's hard to tell without checking the tag numbers on those two. Anyway, it's one of our Shetland mule lambs (Bluefaced Leicester/Shetland cross).
I should be getting broadband today! I'm so excited about this. I have been trying for well over 6 months to get us set up with broadband. Okay, it's only going to be 256 kbps, but that's a lot faster than 24 kbps.
Boggart left our place yesterday, so now we have NO shetland rams, and NO horned rams. I want to keep it that way. I'm sure we'll have plenty of horned ram lambs this spring, but I don't I don't plan to keep any of them around more than a year. Famous last words, right?

I finished both Bird in the Hand mittens, the photos are of the first one unblocked and unhemmed. It fits my hand perfectly! On the second one I relaxed my tension and it's a size larger. So now I have to knit two more and I'll have two pairs. They will be nice and warm with the double layer of yarn (handspun Shetland of course!). I'll post more photos of the blocked mittens after we get broadband. 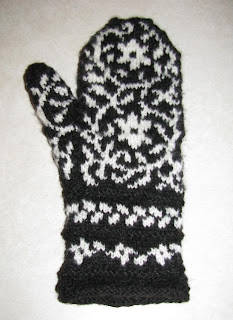 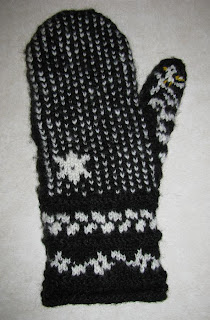 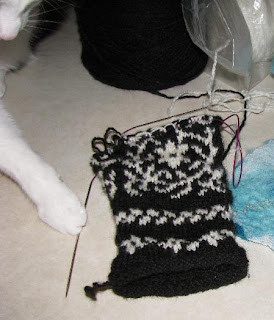 I'm working on the Bird in the Hand Mittens for the Shetland sheep forum knit along group. I love the pattern on the front. This is a pattern that is hard to put down, you just want to keep on going and going and going with it. I hope to finish the first mitten soon. 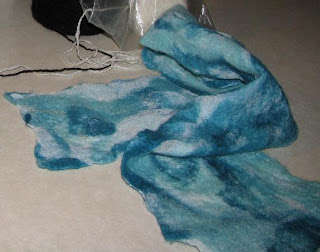 I did a hands on felting demo at our local art show on Sunday. We made the scarf above. It was really fun involving the spectators. They seemed to have a great time.
I also sold two framed felted landscapes at the art show. Yay! Now I can buy more hay for the sheep. We just ran out of the big squares from our own hayfield. I've got some nice small sqaures of alfalfa hay, but I wanted to save them for lambing. Hay prices are sky high around here this winter. Even the grass and Timothy hay is going for $4 a bale (small squares). So I'm going to buy some big squares of straight alfalfa from our hay guy. Lambing is only about 7 weeks away, so the alfalfa should work out just fine.
On Saturday, Terri Drimel and I went to the Indianhead Sheep Breeders Conference in Rice Lake, Wisconsin. We had a great time and learned a lot. I especially liked the presentation by Dr. Fred Provenza, he's doing some great research into the eating and behavioral habits of sheep and cattle. Very fascinating subject. As a result of their experiments, they are using sheep and cattle to naturally restore landscapes and to weed and fertilize without fossil fuel.

After the lamb and chicken luncheon, I bought some Dante sheep milk cheese. It's produced by the Wisconsin Sheep Dairy Cooperative and it's very good. Then Mary Falk of Lovetree farm talked about her sheep dairy operation. Having visited her operation before, it was great to hear her speak.


Speaking of good food, we're getting an egg a day from one of our new chickens - we even got a double yolker last week. It was huge!
at February 11, 2008 6 comments: 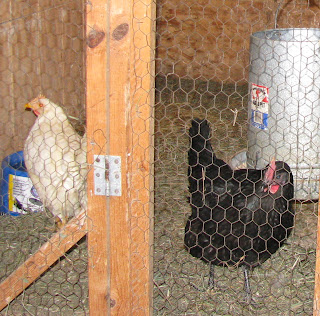 I picked up three pullets yesterday. They are five months old and just starting to lay. My friend Denise's daughter got them at the State Fair when she worked in the Miracle of Birth Center. Unfortunately they were visited by a weasel the other night. I got the three surviving pullets -- two Leghorns and a Black Australorp. Yay, no more store bought eggs for us! 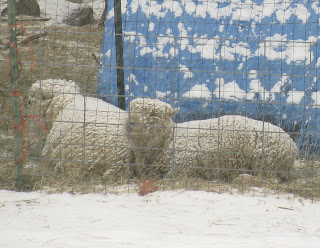 We had some snow today. Here's a shot of the Baby doll wethers in the snow. And below is a shot of River Oaks Hannah, doesn't she look round already?