The end of the year is upon us. As usual, 2011 went by way too fast.  I could have never imagined all the changes that have taken place in my life at the beginning of this year, but the year was filled with beauty, excitement, love and grief.  Certainly a year filled with LIFE and LIVING and that's what it's all about.

Last year at Christmas I was on a creative bender, enjoying all the things I could do with felt.  The purchase of the felt rolling machine made it possible for me to make yardages. I made my first felt garments and then started mixing my felt with stitching and twigs and rocks from the pasture. The compositions were just falling into place so easily!  I knew it was a special time.

In February I was involved in several grant projects and  the Vasaloppet Art show where my work was hung front and center for all to see when they walked in the door.  It was quite an honor to finally get placed there. :-)  I was still working on my rolling machine grant and trying to do as much felting as possible.

Lambing started early in March with the BFLs.  It was the first time we've lambed that early.  The BFL lambs did great in the cold temps, in fact they seemed to grow even better in the cold than they do in the heat.  We lost one crossbred Mule lamb to a combination of wind and freezing temps-- it never even occurred to me to lock up my experienced Shetland ewe that night.  Live and learn.  Shearing was in March too, lots of fun with fleeces.

April saw the arrival of the Shetland lambs and one last BFL lamb to a yearling ewe.  I was away at an Arts Leadership conference and had to rush home when Stan called to tell me he found a lamb with no mama. I was so appreciative to have Stan take care of my animals when I was gone even though he was never a fan of the sheep.  He followed my directions and tried to give that orphan a bottle I had prepared before I left, but the lamb wouldn't take it.  Everything worked out fine in the end, it was just a bit of a rocky start for that young BFL and her lamb.  The conference was a really good experience for me too.  I had an "Ah-ha" moment when I realized that the more I looked inward at what was important to me, my core values, etc. the more my work could serve others.  It's a paradox, but so true. The more we are true to our own purpose, the more our actions will ripple out and affect others. Just think we can be selfish and generous at the same time!

May was filled with excitement at having Jeanne Carbonetti here for the watercolor workshop. I've always loved her philosophy of art and living a creative life.  Her teaching reinforced what I had learned at the conference. It was wonderful to have her here in Mora and get her feedback on my fiber work.  I look forward to working more in watercolor and incorporating some of her painting techniques in my fiber work.

To be selected as a Forecast Public Art planning grant recipient was wonderful too.  I loved the birdhouses I created and put out on display.  They were a big hit with all the people who saw them.  Little did I know that they were the only part of my grant proposal that I would actually get to explore, but they touched my life in such a symbolic and personal way -- and they are the focus of my next big project!

June was busy with felting, doing booths, finishing up my rolling machine grant and the Carbonetti grant report. That was when Stan first started feeling that food was getting stuck at the top of his stomach.  I knew that was serious and I told him to make an appointment with the doctor, but he didn't do it right away.  One night he threw up right after supper and that's when I decided to get him in to the doctor the next day.  I was so worried on our 36th anniversary, but Stan was always optimistic.  He was never one to worry.  He remained that way right up until his last days in October. He was always looking on the bright side and when it became apparent that the bright side was a permanent end to his suffering, he was brave and practical as we made plans for how I would carry on.  I was brave too, little did I know how hard it was going to be.

His illness taught us both a lot about people and about God and the meaning of life. It was such a privilege to see people living their faith, giving their special gifts to make things easier for us -- the doctors and nurses, our neighbors, friends, co-workers, families, and people we didn't even know.  Each had his or her own specialty that was given to us.  There's nothing more important in life than that.


So goodbye to 2011, and hello to 2012 where I hope that my special gift in service to others will make a little bit of difference.

Hold Your Loved Ones Close 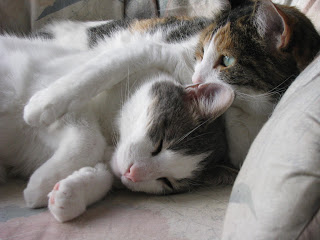 This photo of Tippee and her son Damian speaks for me this Christmas.

I haven't been really in the Christmas spirit, but time marches on and so does Christmas. Tomorrow I'll go down to my mom's for dinner and stop in at the in-laws on the way home.  We are lucky that Stan's brother and sisters live pretty close to my mom so we can go to both places on the holidays.

The boys are out finishing up their shopping, they haven't even wrapped anything yet (5:45 on Christmas Eve).  They come up here to do that. :-)  They've got a puzzle started and I'll help with that tonight after I finish up a couple more batches of pizzelles.  I've got a cherry pie cooling and I put a duck in the oven for our Christmas Eve dinner.

I love duck, but I didn't want to butcher my female muscovies this fall, so I re-homed them with the promise of getting one back in the spring.  Then I spent $3.49/lb. on a duck from the grocery store.  It smells so good, I use a recipe called Shanghai Duck, it's very good, 3/4 cup soy sauce and sugar, 2 cups water, 2 cloves minced garlic, one chopped onion and the duck of course.  I'll make some wild rice to go with it.


The cherries were from the cherry tree I planted when little Bandit died, I think it was 2005.  He was such a cute lamb!  A moorit HST twin out of my favorite ewe, Cocoa.  She was pretty milky and not fully vaccinated for CDT, the grass was green and lush, and little Bandit died of overeating disease.  The only case we've ever had, and it was such a shock. I found him just minutes from death one morning.  There was nothing I could do to save him.  It was so sad to lose him, but the good thing was that Cocoa still had his twin sister Lily to raise.

Anyway, that cherry tree is producing pretty well now.  I froze the cherries I picked in July and made jelly with the juice yesterday and now this cherry pie.  Yummm!  I also made some strawberry, blackberry and raspberry jam yesterday.  It's good to get all those berries out of the freezer.

Speaking of lambs, I gave up and Hansel is in with the ewe lambs now. He was going absolutely nuts trying to get in with them.  It's just not fair to try to keep a ram so close to open ewes.  I can't get him in to the butcher until January 9th, so they will be together for two weeks and any lambs will be born in late May.  I used him two years and that's plenty. I'm beginning to think he is indeed Bb/Bb not BB/Bb. Mia, the little black gulmoget ewe lamb he sired out of a moorit ewe, is looking like she could actually be dark brown.  And his face is quite brown now, not black like it was before.  His fleece is still a beautiful grey with the bown tips.
at December 24, 2011 8 comments:

Thinking ahead to Christmas gifts, I ordered myself a pizzelle baker on Cyber Monday.  I've wanted one for years. One of the ladies in our art group always gives a coffee can full of pizzelles to everyone for Christmas and I thought that would be a fun thing for me to do, too. 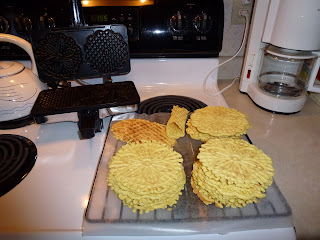 You can see a couple got a little dark there, but they still tasted great.

I also got a new camera.  I don't know how my little Olympus suddenly developed a big streak across the LED screen, but I found it hard to take good quality fleece shots with that camera.  So this time I ordered the same model as Michelle McMillen, her photos are always fantastic. It's a Lumix. I know Kelly Bartels has a Lumix camera too and her photos are great too.  I hope my photos will improve with a better camera. I love it already even though I haven't used it very much. It's more intuitive than the Canon I had and I think the quality of the photos will be much better.

Stan would have turned 60 on Tuesday this week (the 13th).  In honor of his birthday, I am ordering meat and cheese trays for the employee break room at Coborn's.  I feel such a debt of gratitude to everyone there for all their support this summer and their work and contributions to the benefit. I plan to bring in some pizzelles too. :-)  I'm going to try making some chocolate ones next.

I will post more later, things are still super busy here and I can't believe that Christmas is only two weeks from today. Yikes!
at December 11, 2011 9 comments: