Oh No! What have I done? 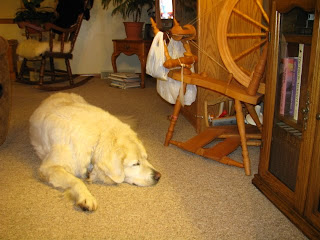 One of these things doesn't belong here.

I think he was just lonesome. He came in for a nap and then decided it was time to go back out to the flock.

I hope all those who celebrate it have a nice Thanksgiving tomorrow. I baked my pumpkin pies while Shachah was napping, tomorrow morning I will make the green bean casserole and then it's over the river and through the woods to visit the relatives. 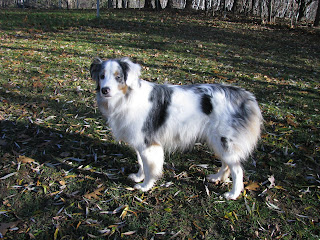 Here's a shot of Ozzie a few weeks ago. He doesn't get much attention on the blog anymore. 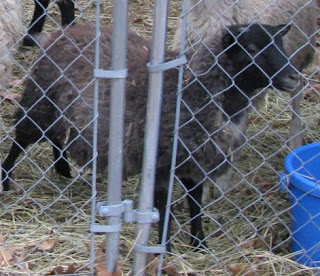 The Shetland breeding group went together on Monday afternoon. Greyson immediately covered half his girls, okay, so he only has four ewes. 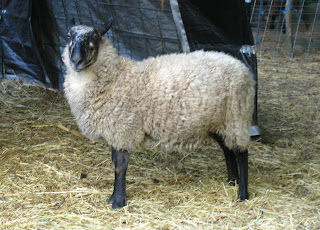 Socks, our yearling Shetland Mule wether, is in with Greyson's group too.  They are all getting along fine.  The photo of Socks above is from September, he has a lot longer wool these days.

And here are a couple of his baby photos - he was so cute! 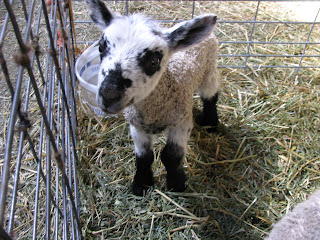 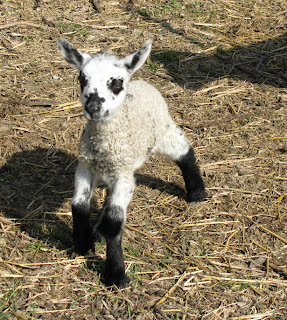 Well it's time to get back to regular programming.  The challenges of breeding season, deer season and a new dog are keeping me awake at night. 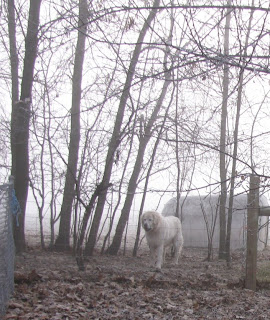 Shachah (the new LGD) has managed to get under the fence three times now. He's drawn to the gut piles the deer hunters leave in the woods. I worry that he could get himself shot. He was breaking out from our backyard after dark, but yesterday he got out from the pasture in the daylight - not good when hunters are also out in the daylight. We have a strand of barbed wire around the bottom of our perimeter fence, so I have to get out there today and figure out where he dug his way out.  Probably the gate area.  I knew Great Pyrenees are well known for their tendency to wander, at least he's sticking close to our house and the woods, but deer season is the worst time for him to explore!


Granite (2+ year old BFL ram) is going crazy with only two ewes in his breeding group. He can jump his fence at will, but so far has only done so once while I was bringing their hay.  I need to move him farther away from the ewes who are not being bred this year or I could wind up with a lot of mule lambs next spring. When Granite was loose before he checked out Harwell's breeding group which got the LGD pretty upset.  So I'm hopeful that the LGD, who is now in the unbred ewe pen, will help keep them from being molested.

Our five market lambs are to be done on Monday (postponed from last Wednesday). I hate this part of raising market lambs. If only I could afford to keep them all.  I will be glad when it's over, until then I toss and turn. 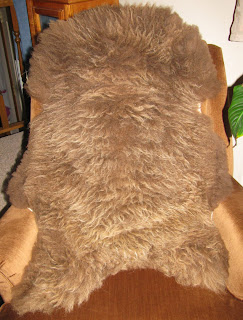 The Shetland above, and the BFL/Shetland below... both are dense and very soft. They will be for sale on my sales blog. 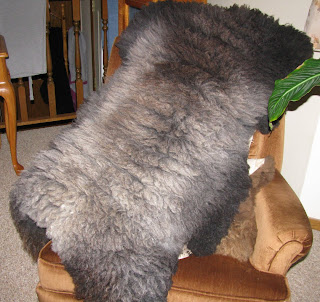 Okay, I'm still in shock.
Last night at the regional judged art exhibit, my wet felted painting of Lena, a Shetland Mule ewe, won First Place in the "Other Art Forms" category AND Best of Show!

There were so many wonderful pieces in the show, I am just so grateful that the judges were able to appreciate felt as a medium.

I'm sorry that I still don't have a good photo of it, so this one will have to suffice...it really doesn't do it justice, but you get the idea anyway. 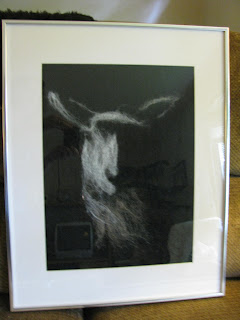 Poor Granite has been so anxious to go in with the ewes. 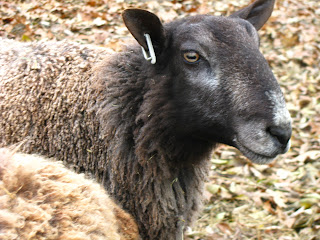 And today he finally got his wish. 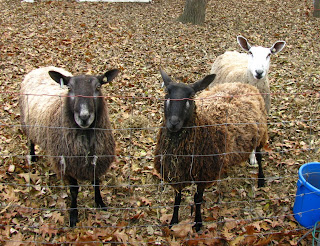 Harwell, being a ram lamb, didn't know what he was missing.  He wandered about, trying to go back to his buddies in the ram pen.  However, by this afternoon, his mind was on other things - including food. :-) 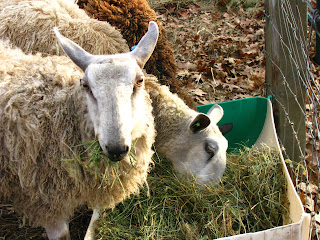 I will leave the groups together for only 25 days, so we can expect April lambs.  If a ewe or two doesn't take, that will mean fewer lambs which is fine by me.

The Shetland ewes were very interested in Harwell.  I will try and get them set up with Greyson by the weekend. 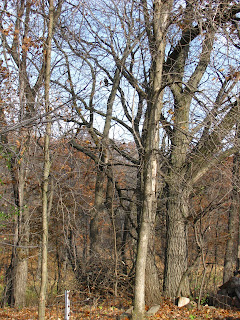 On Friday last week, as I drove in the driveway after work I noticed two BIG birds fly up and land in a tree near our chicken pen. I thought they were turkey vultures at first, but when I got out of the car I saw they were Bald Eagles.  I dashed in for the camera, hoping that my chickens, who have NO respect for fences, would be safe.  One of the eagles took off and soared over the pond and then over our pasture, but I got these photos of the other one as it looked out over the pond. Fortunately, the chickens remained untouched. 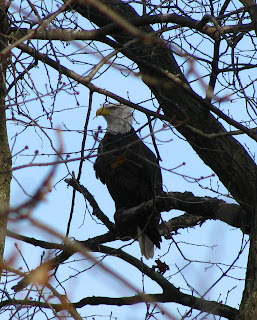 Speaking of chickens, I got six new layers last week - three Barred Rock pullets and three Red Star hens. My favorite egg layers!  I am SO happy to be getting lots of eggs again. And some of them are the really DARK brown eggs that only pullets lay.  I LOVE those for acid-etching. So I will blow them out and use the insides for pumpkin pie. 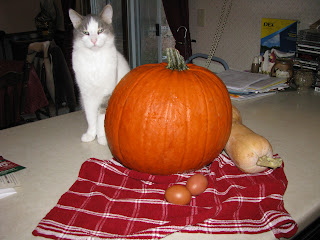 Last night I cooked up the big pumpkin I bought for Halloween (I forgot that I had planted pumpkins on our 40 acres when I made the purchase - so those turned into sheep food). I got enough mashed pumpkin to make 12 pies this winter. Yummm!  I also baked the pumpkin seeds and saved some for next year's plants. 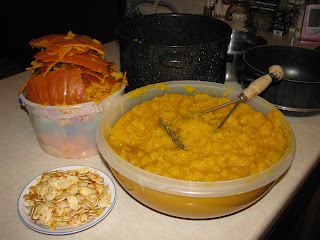 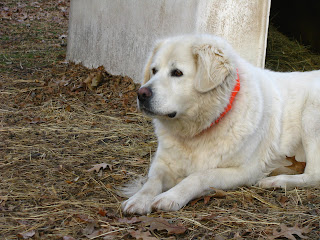 As I went to put this on him last Friday night, he saw the garage door was open and, for the first time since we've had him, he went for a stroll all on his own.  I was freaking out calling to him, trying to get him back inside the fence or at the very least, on a leash. Great Pyrenees are known for liking to wander and I sure didn't want him wandering around on the opening morning of deer season!  First he checked out the neighbors to the northwest - the ones with the fancy little dog. She came out barking away at him and he stopped and looked at her.  Then she took off back to her kennel and he came back to our yard.  Then he headed over to the ewe barn and from there he decided to check out the neighbors to the south of us.  I was really getting worried thinking what a pathetic sap I was chasing him with his dog food in one hand and leash in the other.  But when the neighbor dogs barked at him from their kennel, he turned and headed for our pond.  He seemed to know that was their territory.
Thankfully by then Stan was in the backyard and called to him as he headed for the pond.  Just like a baby who gets really excited when dad comes home from work, Shachah gets so excited around Stan.  He ran right back in the fenced yard. Whew!  I'm sure he wouldn't hurt anyone -- he had the run of his old neighborhood and he's never bitten anyone -- but for him to take off at dusk before the deer season opener was a big scare for me. He's so big and so smart and has a mind of his own, that's for sure.

Help! I'm Dyeing (and picking and carding and sorting) my Wool 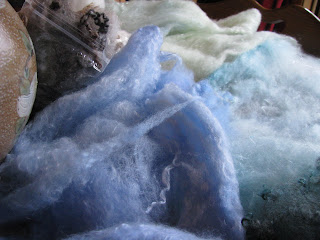 These are the Bluefaced Leicester/Tencel blend batts I decided to dye yesterday.  I love the tencel addition, it gives the BFL fiber even more luster.

For the past few days I've been going through my washed natural colored Bluefaced Leicester fleeces picking out the curliest, most lustrous locks for an order.  They looked so good I decided to make up several  1 ounce bags for future sales. 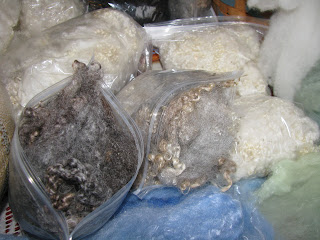 As long as I was at it, I dyed some grey Bluefaced leicester in the microwave too... 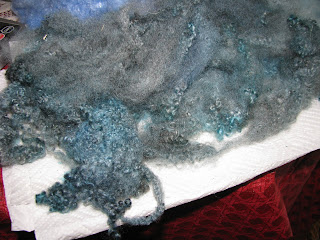 I like that! I want to do more. So now I need more dye and time to pick and sort through my white BFL fleeces too.  I'll package the locks and send the rest off to be processed into roving or batts. 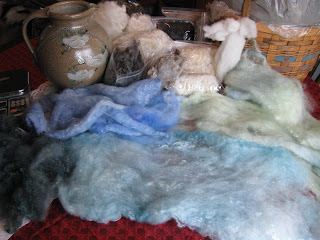 These dyed BFL/Tencel batts will be used for cobweb scarves. I've found the blend spins up into a very lustrous, springy yarn. 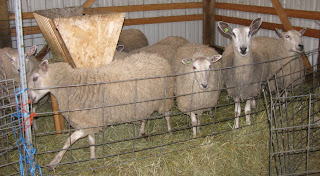 In sheep-related news, the mules have left the premises! The photo above includes a BFL who wouldn't leave the catch pen, of course we didn't let her go with the mules. :-)  The mules will have a wonderful home with a new shepherdess who lives only a few miles from me. They will be used for market lamb production, just as they should be. It feels SO good for me to find them a good home instead of sending them off the the auction and not knowing what their fate would be. They are such beautiful ewes - Peppy will join them next weekend for breeding. 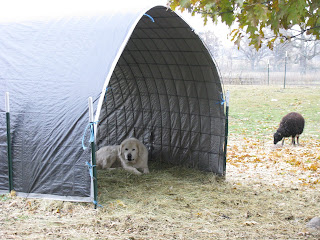 And Shachah continues to be a wonderful addition to our place. The ewes are accepting him pretty well now. My husband is really liking him, too. As you can see in the photo above, he likes to lounge in the ewes' hoop house now. The other day I got to see him in action.  The wind was blowing hard and the ewes were grazing the falling leaves to the north of the hoop house where Shachah was snoozing away. I was a little disappointed to see him sleeping and them off grazing, but as I watched, the wind blew down a small tree near the ewes. The noise and the falling tree sent the whole flock running back toward the barn.  Before I knew it, Shachah was right there, sauntering about, sniffing the air, looking around.  He was perfectly calm and seeing that no danger was present he simply laid down where the ewes had been grazing. Slowly they ventured back to the vicinity and started grazing again. :-)

He barks at night, sometimes a lot, sometimes just a little. The other night a fox was bugging him. And last night it was the coyotes way off by the river. Stan went out and called his name and he quieted right down.

I was told today that it's best for us to acknowledge his barking since he is an only dog. That will give him a feeling of having some back up so he won't have to bark as long. Those LGDs really are smart!

He never barks at the neighbors' little dog, he's great with our cats and our chickens.  Who could ask for more? 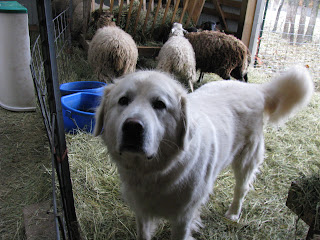 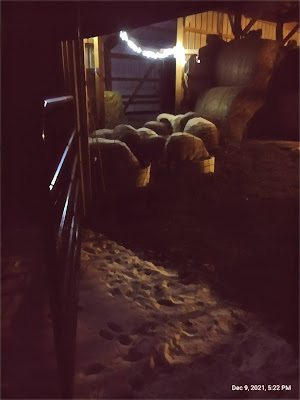