I've been taking Fiona Duthie's online Felting with Paper class. It's wonderful, she's a great teacher with so much knowledge to share. But the paper I got was different from the usual paper in the brand she recommended. So I fell way behind when it wouldn't perform the same way. Fiona sent me a sheet of her paper and it made all the difference! 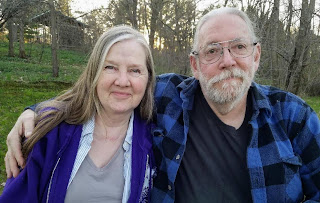 Sid and I are hanging in there, trying to stay home as much as possible these days. The days are full of all the projects we get ourselves into. Lots to do now that the weather is getting nicer.

Not sure if I mentioned that I sold my 40" FeltCrafts felt rolling machine in March. I'd had it for 10 years and didn't use it all that much. A friend was in need of a rolling machine for her work with veterans, so I let it go on the spur of the moment.. She loves it and has gotten a lot of use out of it already. But when I decided to make a large project for Fiona Duthie's "Separate Yet Connected" online exhibit, I began to regret that spur-of-the-moment decision. I spent three days in my studio creating a large piece with pre-felt inclusions (photos to come after the exhibit opens). It was then that I really regretted selling my old stand-by.

I saw an ad for the Gentle Roller and a friend's FaceBook post about using hers. And it just so happened that we closed on 20 acres in mid April to settle my dad's estate. So I had the funds and I went for it! I ordered the 48" width with the fulling drum. 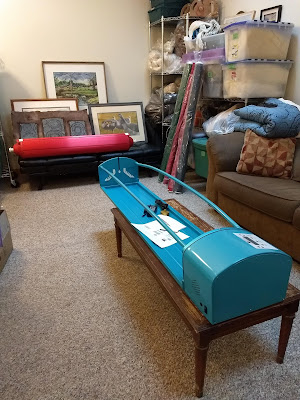 It came last week, all the way from China (I ordered it from the designer in Australia).  I've put it together and found a place for it in the front studio. I hope to actually try it out today. 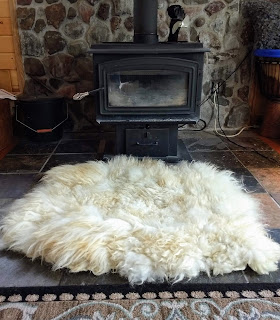 I've done three felt pelts this week for a friend. They were big fleeces. I started off with the 4 pound one above (had to toss half of it out due to excessive VM). Then I did the 6.5 pound one below (I skirted out the entire topline). 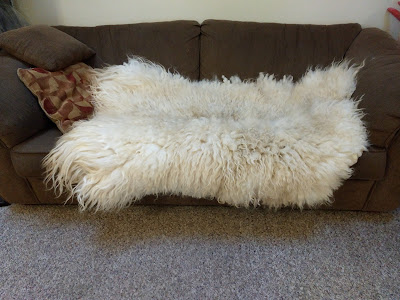 And I did the 8 pound monster yesterday. It's still wet in this photo,it will look whiter when dry. Plus I will shake out a lot of the VM. I didn't skirt away the topine after seeing how well the VM shakes out when these fleeces are finished. 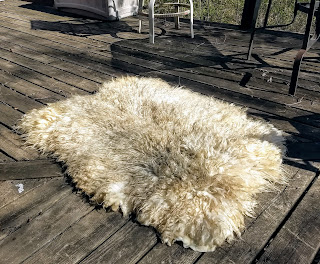 I've got one more of my friend's fleeces left; that one will be for me. It's from her ewe named Tina. I did Tina's fleece last year (shown below) and asked if I could have her 2020 fleece.  I'm so excited to make one for myself! 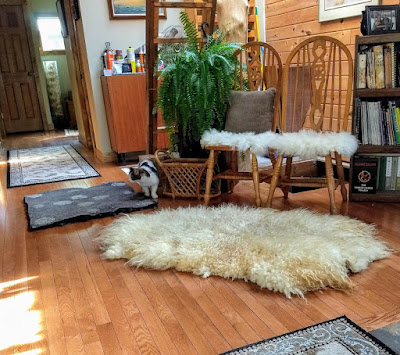 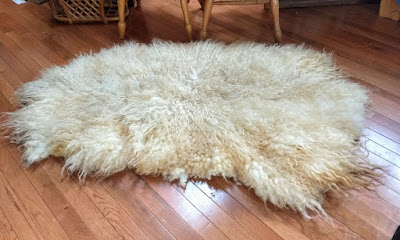 They are wonderfully dense and thick fleeces! Polypay/Clun Forest with a little bit of Icelandic in the mix. I MIGHT breed a few ewes in the fall and I'm thinking I might use an Icelandic ram. But now I am also checking into the Clun Forest breed. 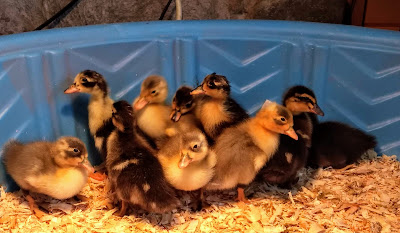 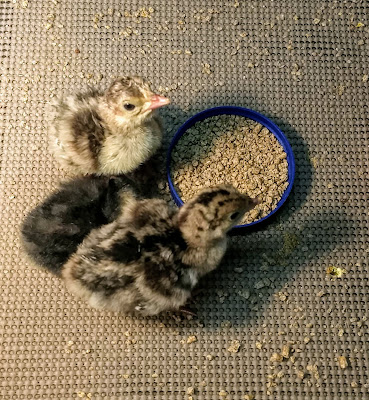 We have two broody turkeys, two broody chickens, and one broody duck.

And the chickadees have been back checking out the felted birdhouse right outside our upstairs bedroom. Spring is definitely here! 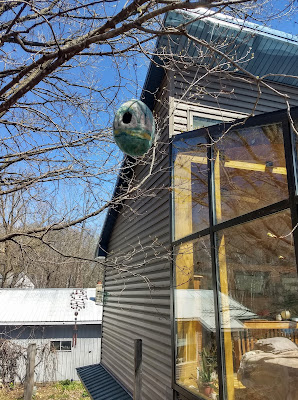