Lambs on the Way! And chicks, poults and ducklings.

Well, we will have some lambs after all. And they're due right when I'll be out of town teaching up at North House.
It was a cold and blustery day at the end of February when I was busy preparing for my dad's funeral service, the boys' hay net was empty and frozen to the ground. I thought I could combine the boys with the ewes since it was almost March. I hoped the ewes weren't cycling anymore and I was pretty sure the boys weren't fertile since we had crimped the last of them in October. But after three days of them being together, it was clear that Smokey was cycling and the boys were VERY interested. Sid and I did the rodeo on March 1 getting the boys separated from the girls again and crossed our fingers hoping for the best. But it was pretty clear by mid-May that Smokey was starting to bag up.

I'll be down to 23 sheep tomorrow after bringing four wethers and two non-wethers to the processor. Slowly but surely I'm whittling down the flock to a more manageable size for our limited pasture. It looks like Smokey will have twins, so that is going in the wrong direction. But at least no one else is pregnant.

I was given a llama fleece a couple weeks ago. And I decided to try a felt pelt with it since it was holding together pretty well. I have to say, it felted pretty fast, but there is some shedding of the long fibers. There was a lot of fiber that I skirted away due to VM, but I saved it to comb out. It's very soft llama fiber. 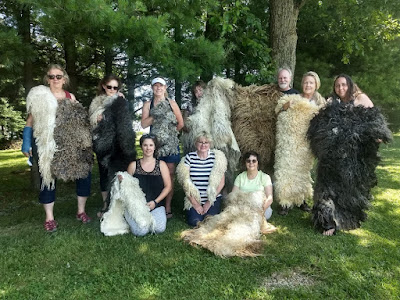 I taught a couple felted fleece classes in the last few weeks. One for Sherry Tenney in Winchester, Maryland and one here at my studio in Ogilvie. It's always fun playing with wool and sudsy water outside on sunny day! 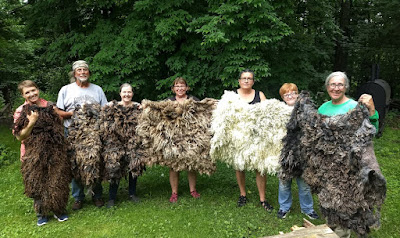 I was able to get four yearling Lincoln Longwool fleeces from Robin of Pirate Sheep Co. I got one done so far. Those locks are so long and lustrous! 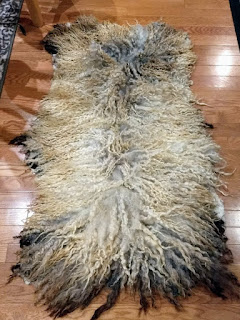 And we've had chicks, turkey poults and ducklings hatching like crazy lately. Lots of Crested Cream Legbar chicks which are fun because you can tell males from females at the hatch. And the turkey poults are just so sweet and fun to watch.

Not to be outdone, the Orpington hen went broody and has 12 barnyard mix chicks too. 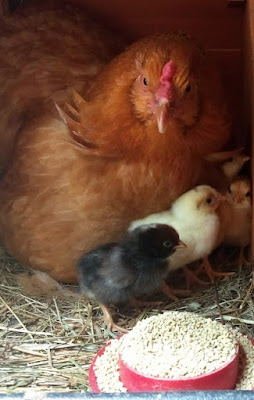 The worst part is that we are having a fox problem (we lost 6 hens, four turkey poults, a nest of duck eggs with two broody ducks mauled, all in one day).  So now all the poultry have to be penned up 24/7. I'm trying to keep the two broodies and their babies in the barn during the day, but the Buff Orpington has a habit of flying over fences and going out in the sheep pen. Hopefully she'll stay close to the sheep and the fox won't get her.
There's only one egg left in the incubator now. It's a peafowl egg from our friend who raises them. He brought over 13 eggs that weren't being sat on. Seven started to develop, but only one has made it to the end. I am keeping my fingers crossed that it will hatch. We'll put it with the littlest turkey poult, who did not like being with those messy ducklings.
at July 11, 2019 No comments: