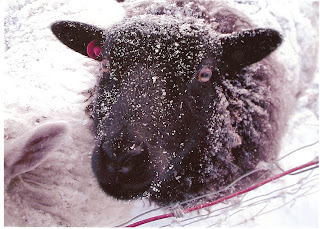 And a happy "ewe" [lamb] year!
As I sit here on Christmas Eve munching on garlic pretzels (recipe from Nancy Larsen) and looking forward to a cheesy hashbrown potato dish (recipe from Kim Nikolai) tomorrow at my mom's, and seeing the bird feeders made by Wille Lumber wrapped up under my tree to be given as gifts, I am amazed at how my much life has been blessed by my fellow Shetland sheepbreeders. Who would have ever thought that getting a couple sheep back in 2001 would lead to all this? Thank you all for sharing this wonderful journey with me! 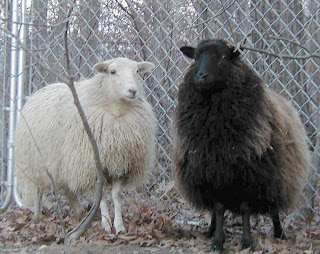 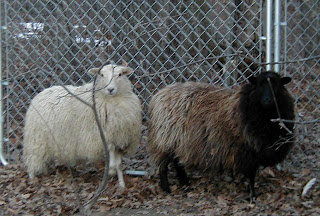 Snowball and Rainstorm, our first two ewes, just hours after they arrived here on Dec. 16, 2001. Snowball was a ewe lamb, 1/2 Shetland, 1/4 Border Leicester and 1/4 Finn. She became our flock leader, you can see she was already stomping her foot even then.

Rainstorm was a three year old, purebred Shetland. She delivered twin ewe lambs in April the next year. What a thrill that was! That's when I realized that Christmas comes several times a year with Shetlands -- at shearing and lambing too, not just in December. :-) 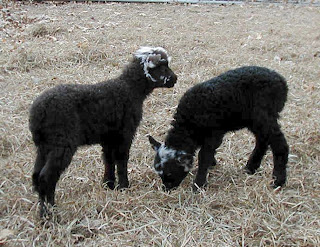 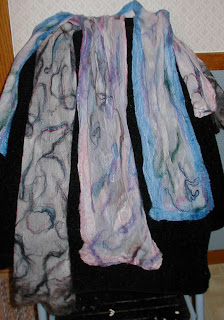 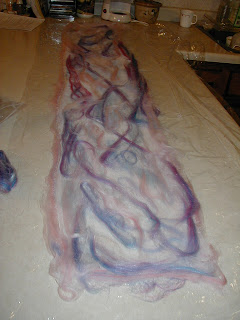 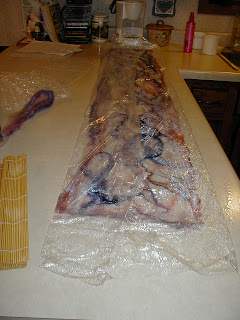 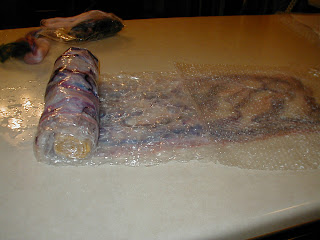 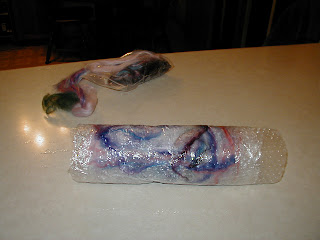 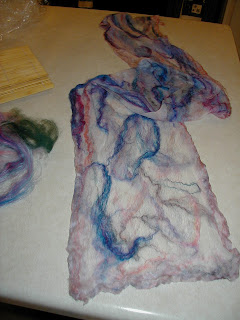 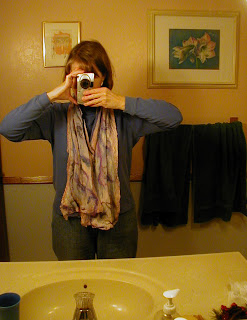 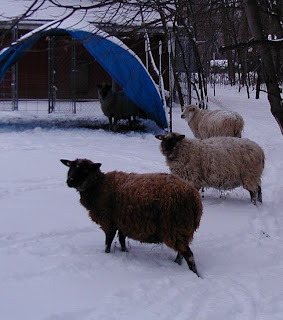 We got a few good snowfalls since I last posted. The photo above of Boggart's ewes (River Oaks Hannah, Cora, and Eliza) is from last week, we've got more snow now, about 12-14". I love seeing the landscape covered in a marshmellow-y blanket. The last few years we haven't gotten much snow until late in the winter.
This morning was pretty cold out, about -20F. I've got a waterfowl down coat with a hood so I'm toasty warm when I do my chores. Everything except my nose and my fingers. I don't even bother wearing my glasses because they just fog up and they're more trouble than they're worth.
The sheep take the cold quite well. We did have a few cold hooves last week and I added a lot of bedding inside the pole building so they could nestle in it at night. I closed the sliding door to only about 18" open because the snowfall came from the east and was piling up inside the building. When you have shovel out the pole building, it's time to close the door - duh.
Tomorrow Dougal will be returning from his work at Kimberwood. And Kimberwood Harrison (polled black gulmoget ram lamb) will be heading back home with Kim. I sure hope he bred my two katmoget ewe lambs! I wonder if katmoget would ever cover up gulmoget since they are co-dominant. I know a gul-kat should look like Roban Dillon, but could one cover up the other? How did the ones show up in the North American flock, were they hidden under the extension gene or did they pop out of katmoget lines? 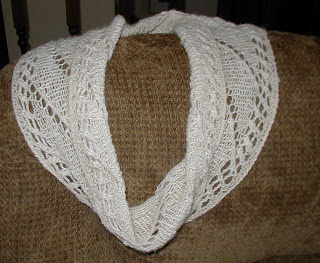 I've been knitting a lot lately. The moebius pictured here is made of baby alpaca fiber that I bought in October. I combed and spun up 2 ounces and I had some left over after this was completed. It is incredibly soft. Maybe too soft! Done on size 10 needles using a Cat Bordhi pattern from Knitty Gritty, it only took a couple days to knit up. I love knitting moebius scarves! 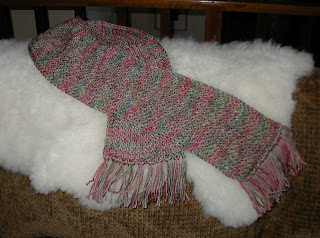 On Dec. 5th our art group took a shuttle bus to Minneapolis to see the O'Keefe exhibit and the Frida Kahlo exhibit at the Walker. I much preferred O'Keefe's work even though I've been an fan of Kahlo since my college days of writing research papers on women artists. I started the scarf pictured above during the drive down. The yarn was given to me by a friend, it's Artyarns Supermerino. I wanted to something simple, so using size 7 needles, I cast on 21 stitches and knit 2 rows then did s1, yo, k2tog every row until I used up almost two 50 gm skeins. Then I knit two more rows and cast off and did the fringe. This scarf was finished last night, Dec. 7th -- only took two days with all the driving we did to the cities. I love the diagonal slant of the stitches and the fact that it's reversible.
We had our office Christmas party yesterday. We went to Fogo de Chao, a Brazillian steakhouse where you can eat whatever kind of meat you like and as much as you like. The waiters bring the meat around on big skewers and slice you off a piece if you like. The leg of lamb was delicious! The lamb chops were not - too lamby tasting for me. Of course the sirloin and rib eyes were great too. And the chicken and salad bar too. Oh, the wine! That was the best Reisling I've ever had. 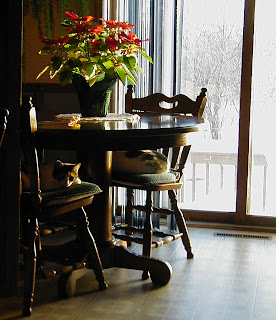 So with the office party history, I realized that Christmas will be here all too soon. I finally decorated the tree this afternoon. I just don't feel like putting out all the rest of the stuff though. This will be the first time in 25 years that I haven't put up the nativity set that Stan's parents made for us. I'm going to use my Christmas bonus to get a new digital camera. I noticed Sabrina's photos of Bombarde were SO much better than mine ever were. My camera is six years old already and technology has improved a lot since then.