It's been another busy week here. I taught two Nunofelt scarf classes on the 17th and set up another one on March 18th at the Pine Center for the Arts in Pine City, MN. 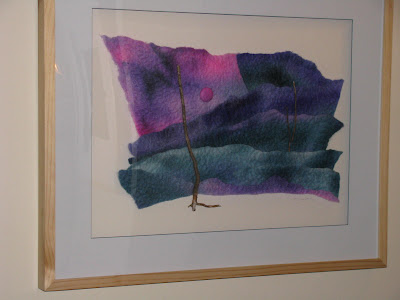 I've been working on matting and framing several new pieces. After reading Jeanne Carbonetti's latest book, "The Heart of Creativity" I let my ego step aside and just let the pieces flow out of me - this resulted in SIX new pieces. The one above is made from the scraps of my felt jacket and twigs from the pasture that I collected last fall. Now comes the uneviable task of framing them all. That's the worst part about doing 2-D work, IMO.

On Thursday Casey Derosier from Minnesota Grown came out to interview me for her Livin' La Vida Local blog.  Wednesday I should have been cleaning the house, but I was frantically framing those felt pieces.
So Thursday morning I quickly straightened up the house as best I could before Casey arrived at 10 a.m. It was a good thing I did because I didn't realize how much we would be doing that day! She wanted to see it all, the sheep, washing a fleece, carding, combing, spinning and felting.  Luckily I had one raw fleece left from last spring's shearing.  It was a dark Shetland Mule fleece. 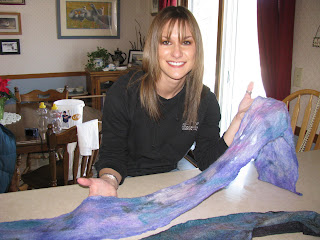 I wanted us to make something cooler than just a little sample piece of felt, so we decided to both make nuno felt scarves. Casey's holding mine in the photo above.  I hope she got some decent photos for her blog and I hope she had fun.

Broody Buff Chantecler Update: She had 10 eggs under her. I candled two of them when she hopped off the nest the other morning when the overnight temp was -25F. I was worried about the eggs that night because we have no heat in that little barn, but she seems to have things under control. Those two eggs were clear as a bell, darn! I marked them with a marker and tucked them back under her.

The next morning it was -18F and she hopped off again when I arrived to feed everyone. I candled them all and found that seven eggs were infertile and three had live chicks. That tells me the rooster has a favorite hen! Lucky for him that at least three eggs were fertile. Temps are warmer now and I hope the viable eggs start hatching this weekend. 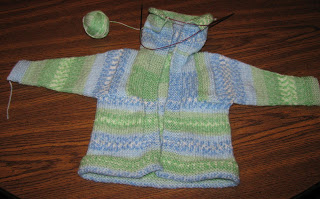 Tomten Sweater Update: Almost done with the baby tomten done using in stockinette instead of garter stitch. I misunderstood the hood directions and made a very small hood.  So after I finished up the sleeves (I hope I made them long enough!), I went back and ungrafted the hood.  Thank goodness I have enough yarn to add about 12-16 more rows to it and the color sequence matches up perfectly!  I plan to put a zipper in the front and then block it to help with the shaping.
at January 25, 2011